What I’d like to talk about today are three nutrients that a lot of farmers aren’t even using today. But when we work with farmers, we see these deficiencies in their fields quite often, especially when we soil test and farmers have questions whether or not they need to manage zinc, boron and sulfur. Or if it’s just something that shows up on the tissues test and they’re just and don’t really need to worry about. 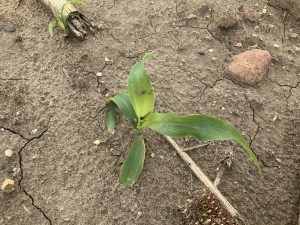 So. the first thing I talk about that is zinc, because it’s one of the first things I usually see in a cornfield for deficiency in the spring. And the reason you see it in the spring is it’s most likely you’re going to see it when you have cloudy weather, saturated soils, web root systems, kind of a slower growing plant and it shows up as kind of a whitish blotchy pieces on the on the leaves versus stripes.

And the key in of managing zinc is using, especially if you see it at that time, just an chelated zinc, it’s more active about 10 times more active than other forms of zinc. And you can mix that in with your herbicide in a lot of cases and fix that situation in real short order. 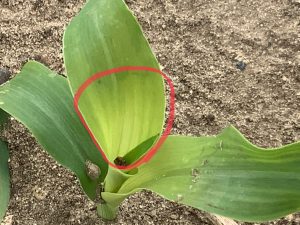 I know I had a grower who had zinc deficiency almost from fencerow to fencerow and he hadn’t sprayed his herbicide yet, and we mixed it in with his Callisto. And that actually fixed that field almost overnight. And a lot of times while you’re catching this right before the plant determines its ear size, that’d be the v6 stage, and you can fix it so you don’t have an issue where that plant is weak when it’s really trying to determine the number of rows around the ear. And when you do that, in these situations, you know, a lot of times it turns out to be about a 5 to 10 bushel return on investment. So, that’s zinc.

Boron is quite a bit different. It’s happens maybe a little bit later in the year. Boron is a lot more mobile in the soil. In other words, if you put it on with your starter, it very well could be gone by the time you need it at ear set. And so with boron I do try to get into a wide drop application a little bit later on in the year so that when that ear development or ear pollination set time is taking place, boron is available. And University of Wisconsin has some nice calibrated soil sample results that tells you when you should put that on.

Sulfur is the last nutrient I’d like to talk to you about and that generally, you know the biggest input on uptake of sulfur really comes in at about v6 in corn. And that’s more of that classical interveinal chlorotic stripes that people do associate with sulfur.

And I think a lot of people have seen that in their fields.

Sulfur can move a lot like nitrogen, if you’re getting a lot of rain, it will tend to precipitate out of the root zone. And so that’s why we’d like to put that on closer to that v6 stage. There’s a couple different forms of sulfur that you’ll run into.

There’s the organic sulfur, and that actually has to turn into sulfate for the plants to take it up. So, if we’re putting on sulfur when we’re going to plant to take it up, we want that to be in a sulfate form, such as ammonium sulfate, ammonium thyal sulfate as 50% organic and 50% sulfate. So that’s another form that works really well for corn. 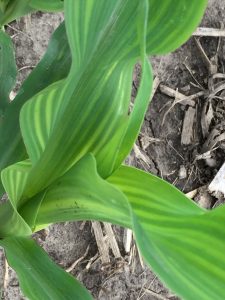 The Ratio Formula
Do you think about it on a ratio basis, about five pounds of nitrogen for every pound of sulfur. So if you’re going to have 200-bushel corn, we need to come up with about 40 pounds of sulfur. And typically, about 20 pounds of that sulfur would come out of your organic matter, but you should plan on putting the other 20 pounds on with a sulfur fertilizer.

ROI with Sulfur
Sulfur is a product that I have seen a really good return on investment for in the past. When you’re in an environment where your sulfur is leached out of the root zone you’re seeing that deficiency you have organic matters less than 2.5%, we have seen a five to 15 bushel increase in yield with a software application.

Thanks for watching this video. Please visit GrowersAxis.com and go to our Insights Library to learn more about micronutrients and other crop production information.

You may also give us a call at 515-249-1993 and get connected to a Grower Advisor and visit with them about your particular situation.

And most of all, thank you for watching this video and giving us an opportunity to work with you on your farm.