Where Does Fungicide Pay Most Often?
About the time that corn is waist high is when my phone starts to ring. And the questions that come through that phone are, “What do I need to do on fungicide this year?” There’s, two camps. There’s a camp of, “I’m not going to think about it. I’m just going to spray.” And then there’s the camp of, “Please kind of walk me through my odds of getting some money back on this investment because God knows it’s a lot of money”, especially when you start talking about $35 an acre, or even, you know, $20 to $40 an acre is kind of the range. And such as the number of decisions around, “Should I spray up on the site?” And so today I’d like to just visit with you and share kind of what goes through my head as an agronomist.

Some Ways You Can Spray a Fungicide
For one thing, there’s a number of ways you can spray a fungicide. You can spray it early on, at about that v6 stage, and that’s supposed to help like crown rot. I’m not seeing a lot of success for that in the past, but I know it goes on quite a bit.

But it’s not generally something I tell a farmer that normally you’re going to see an ROI on, might see some better harvest stability, but that’s kind of where it ends as far as I’ve seen. Now, when we go to like the v10 to v12 stage, we can still get through it with almost any self-propelled sprayer. In years when the rainfall you know, is above average, say you’re getting over seven inches of rain in June and it’s warm weather that’s prime weather for gray leaf spot If it was just the opposite of it and was wet and cold, that’s the prime weather for Northern corn leaf blight.

Spraying at Tassle = Highest Possible ROI
And so those were the years that I have seen, you know, similar plant health benefits as spraying at tassel, which is actually probably the highest chance of getting a return on your investment.

Of course hiring an airplane to do it at tassel is, you know, it’s an added expense. So you kind of have to add that in there. But if you’re above average moisture and you have high yield potential, your odds of success spraying and in that situation, you know, I think is very high.

The other component to that is what crop are you raising? Do you have products that are really going to need late fill? So those would be your full season products, possibly they were planted a little bit later and I do see a better chance of return on investment in those situations.

Up to 75 Bushel Increase in Yield at Tassel
I was involved in doing some trial by hybrids. And we had a hybrid that was very offensive had very high yield potential, kind of average gray leaf spot and stock health. And we were actually seeing up to 75-bushel additional yield by putting on a fungicide at tassel on that hybrid. So, your seed partners, you know, really know which products need to be sprayed with a fungicide. But I will tell you, the environment trumps almost everything when it comes to getting return on investment with your hybrids. So those above average moisture, above average relative humidity, above average yields, Those are the kind of situations when you do see that return on investment.

Can I Get Away with a Generic Fungicide?
Another question I often get is, “Can I get by with just a generic fungicide because you know, those new ones that are out and there’s a whole range of them that came out in the last two years are really showing better plant health, better consistency, but they also cost about $10 an acre more.”

And I would kind of go back to our previous discussion there on which hybrids in which situations you need that extended control on. So if I’m in those situations where the temperatures and the moisture is really high, and I’m seeing early disease before even tassel, I know that I’m going to have a situation, where I need late plant health. And that’s when I think those investments in those better fungicides do pay off.

Do I Need a Curative Product?
One other question I get is, “You know, do I need a curative product?” Well, curative and preventative I don’t think are all that relative when it comes to fungicides. I don’t believe you can truly take a disease out of a plant once it’s in there. But I do think multiple modes of action are beneficial. And that’s generally what you get with those types of fungicides, that way we don’t get resistance. 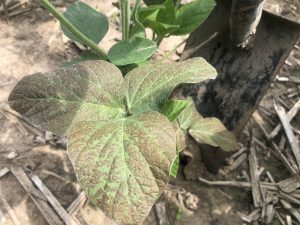 Fungicides Help, But They Don’t Dry Down, Do I Want to Harvest Two Weeks Later?
Soybeans always kind of present another set of odd discussion points. So, I get the question, “You know, I hear that fungicide helps my soybeans but it also seems like man, they don’t really dry down in the fall either though, and, you know, do I want to harvest two weeks later?” Well, you really do want to harvest two weeks later because what that means is your plant lives two weeks longer. And when that plant lives two weeks longer, the seed size goes up. And that’s a huge benefit when it comes time to calculate the yield. Big beans, you know, are gonna yield more than small beans. It’s just a fact of life. And the key to spraying your soybeans with fungicide is choose fungicides that do not have resistance in Iowa today. And a lot of the products that people have seen success with the last 10 years, almost all of them do have resistance out there. You know the brown spot, frog I leaf spot, Cercospora, a number of diseases that really do affect soybeans.

So, make sure you contact one of your grower advisors to figure out what fungicide you want to spray on your soybeans.

When to Treat?
They need to be treated at our three and that’s when there’s a pod in the top four nodes. That’s at least 3/16 of an inch long.

If you’d like to learn more about making that right fungicide decision, please visit GrowersAxis.com and visit our Insights Library.

Thank you for watching this video and look forward to visiting with you more in the future.